Websites information:
"lxr.mozilla.org, mxr.mozilla.org are cross references designed to display the Mozilla source code. The sources displayed are those that are currently checked in to the mainline of the mozilla.org CVS server, Mercurial Server, and Subversion Server; these pages are updated many times a day, so they should be pretty close to the latest‑and‑greatest." (from Mozilla)

"Mozilla is a free-software community which produces the Firefox web browser. The Mozilla community uses, develops, spreads and supports Mozilla products, thereby promoting exclusively free software and open standards, with only minor exceptions. The community is supported institutionally by the Mozilla Foundation and its tax-paying subsidiary, the Mozilla Corporation. In addition to the Firefox browser, Mozilla also produces Thunderbird, Firefox Mobile, the Firefox OS mobile operating system, the bug tracking system Bugzilla and a number of other projects." (Wikipedia)


(1) Vulnerability description:
Mozilla website has a computer cyber security problem. Hacker can attack it by XSS bugs. Here is the description of XSS: "Hackers are constantly experimenting with a wide repertoire of hacking techniques to compromise websites and web applications and make off with a treasure trove of sensitive data including credit card numbers, social security numbers and even medical records. Cross-site Scripting (also known as XSS or CSS) is generally believed to be one of the most common application layer hacking techniques Cross-site Scripting allows an attacker to embed malicious JavaScript, VBScript, ActiveX, HTML, or Flash into a vulnerable dynamic page to fool the user, executing the script on his machine in order to gather data. The use of XSS might compromise private information, manipulate or steal cookies, create requests that can be mistaken for those of a valid user, or execute malicious code on the end-user systems. The data is usually formatted as a hyperlink containing malicious content and which is distributed over any possible means on the internet." (Acunetix)

This means all URLs under the above two domains can be used for XSS attacks targeting Mozilla's users.

Since there are large number of pages under them. Meanwhile, the contents of the two domains vary. This makes the vulnerability very dangerous. Attackers can use different URLs to design XSS attacks to Mozilla's variety class of users. 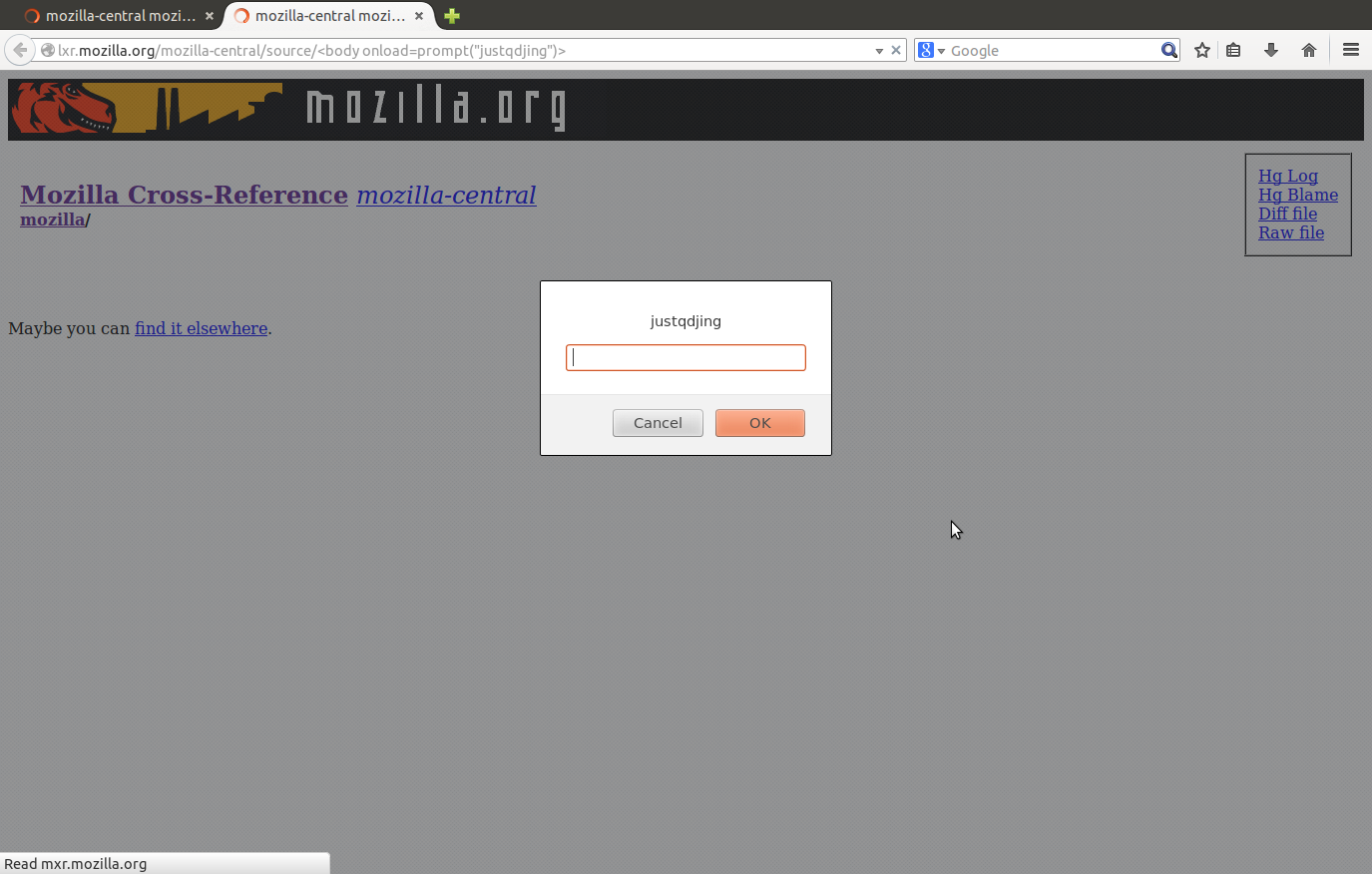 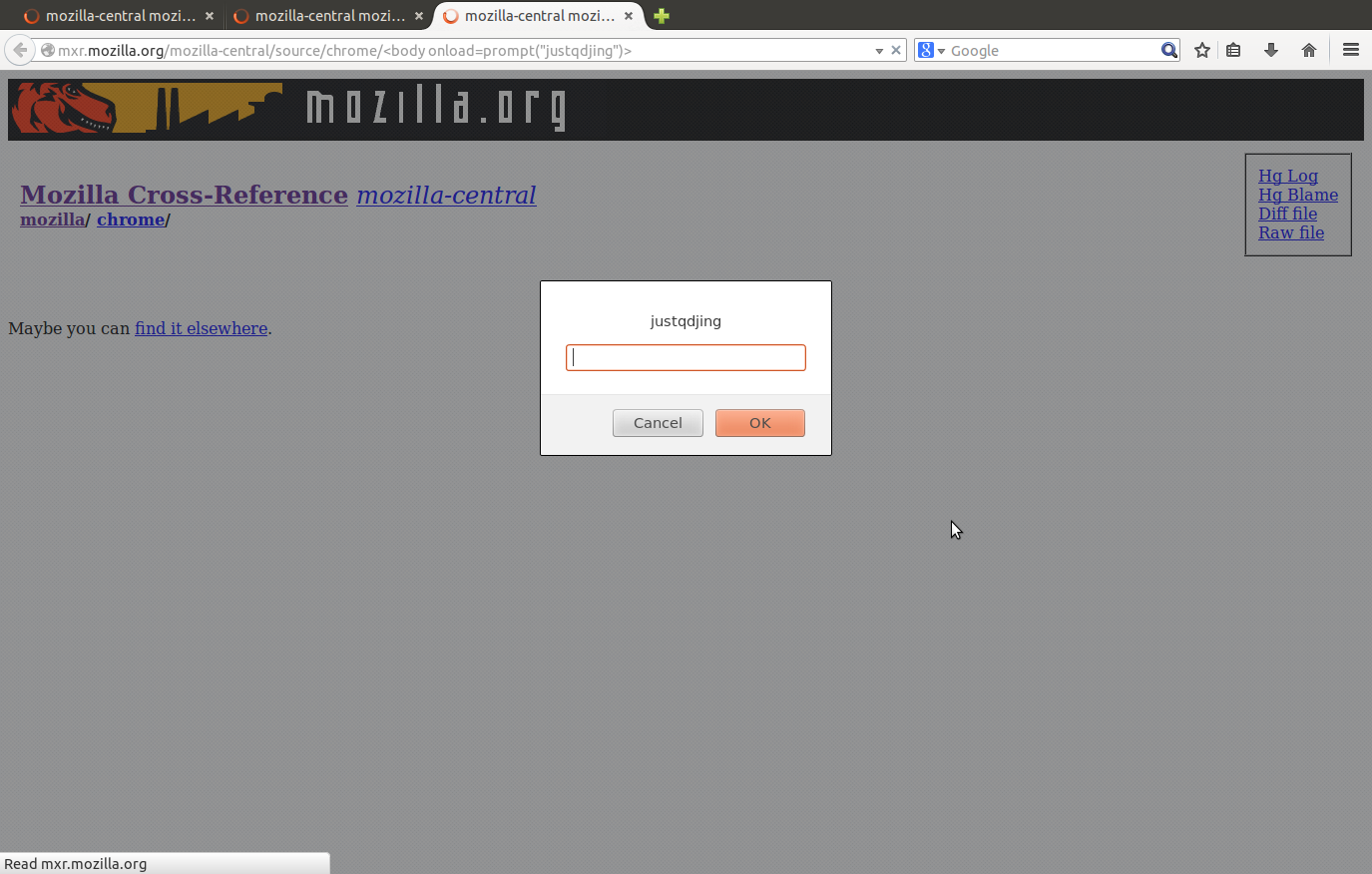 
(2) Vulnerability Analysis:
Take the following link as an example,
http://lxr.mozilla.org/mozilla-central/source/chrome/<attacktest>

In the page reflected, it contains the following codes.
<a href="/mozilla-central/source/chrome/%253Cattacktest%253E">
<attacktest></attacktest>
</a>

If insert "<body onload=prompt("justqdjing")>" into the URL, the code can be executed.

The vulnerability have been reported to bugzilla.mozilla.org. Mozilla are dealing with this issue.